With Southbank Sinfonia and conducted by Anne Dudley

To celebrate 40 years since the release of their lauded and timeless debut album The Lexicon of Love, ABC will perform the iconic album in its entirety.

ABC, fronted by Martin Fry, were formed in Sheffield in the 1980's when they decided they wanted to fuse the world of disco funk with their own unique post punk vision. Since forming, ABC have released 9 studio albums, including their debut album The Lexicon Of Love, which sold over a million records. 36 years later, they returned with their resounding triumph, The Lexicon Of Love II, which immediately entered into the top 5.

Martin Fry’s masterpiece The Lexicon Of Love went straight to number one upon release. Fusing dance floor finesse with a post-punk attitude, the album spawned timeless tracks such 'Poison Arrow', 'The Look Of Love', 'Tears Are Not Enough', and 'All Of My Heart'. The album saw ABC enchant the world with their own unique brand of pop and remains one of the best albums of all time.

Worldwide hits and several studio albums later, ABC demonstrate that even now 40 years on, Martin Fry’s song-writing and musicianship is still as contemporary as it was in the beginning. 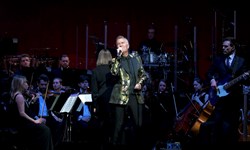