Artistic, intense and formidably inventive, Antonio Forcione is a performer of genuine distinction. Ever unpredictable, he is a celebration of the unexpected elements in life, a music of rare delicacy, humour and, not least, passion.

Antonio’s impressive 20 albums and extensive international tours in festivals and theatres - both as a solo artist, in duo and with his acoustic quartet - have brought high critical acclaim from as far as Australia and Hong Kong to the Caribbean, Russia and all over Europe.

A far cry from his humble beginnings in a small village in southern Italy, Antonio worked his way through art school, eventually performing on the streets of London and winning the Covent Garden 'Street Entertainer of the Year Award', which led straight to an appearance on the BBC and a European tour. He hasn’t looked back since, nor has he ever forgotten his roots - if you listen closely to his compositions, you can feel the nostalgia for the village, the olive groves, and the dusty streets.

Having completed his well-received album Sketches of Africa, he is now focusing on Cuba where he is collaborating with artists such as Pancho Amat, Alejandro Martinez, and Jorge Luis Chicoy for his next album. 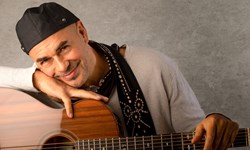