Please note that this event has been cancelled.In the making of their fourth album Headlight, Grammy award-nominated band Della Mae has claimed a more daring sense of freedom than they’d ever allowed themselves before.

Their first full-length since their 2015 self-titled record, Headlight matches its raw intensity with an unbridled joy. Described as ‘the record we’ve always wanted to make’, Della Mae views their newfound lack of restraint as an imperative for the all-female band.

Boldly breaking genre convention, the band have pushed beyond their bluegrass roots and followed their instinct to their most sonically adventurous body of work to date - embracing the album’s potential as a platform for change and delivering a collection of songs at turns fearlessly personal and powerfully resonant.

Della Mae imbues their songs with the unshakable sense of purpose they’ve embodied since first getting together. Formed in Boston in 2009, with ambitions of disrupting the male-dominated music scene, the band has proven undeniably ahead of their time in placing women at the forefront.

Over the years, the band have worked toward that goal by teaming up with the U.S. State Department, and traveling to over 30 countries in an effort to improve opportunities for women all across the globe. For Della Mae, Headlight marks a whole new level of fulfilment of their longtime mission as well as a profound evolution from their earliest days.

‘From the beginning this band has been about reclaiming or changing the conversation for women, especially those whose stories haven’t been told. Advocating for women's rights is the backbone of this band, and we realized that adding public service work to our touring was an important way we could make a difference. It’s important to us to back up what we stand for with what we say in songs. This is our contribution as a band: to keep up the tradition of the women who trailblazed before us and leave the world a better place than when we found it.’ 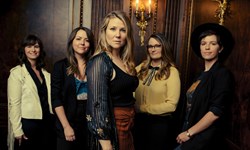