Experimental four-piece return to the Music Room following their sold-out headline show in 2016.

They have performed their original compositions solo, as a duo, trio, quartet and as a large ensemble across a wide variety of events from site specific installation works to live film scores. Their records Mallet Guitars One –Three, Large Electric Ensemble and Twenty-Two Strings have been released to significant critical acclaim from the likes of The Wire, Pitchfork, The Quietus and The New York Times. The group have received airplay on the BBC, ABC and more with their music favourably compared to the likes of Steve Reich, Glenn Branca and John Cage.

'Churning pulses, alternate tunings and dense harmonic worlds...all the strings being heard at once'
The New York Times 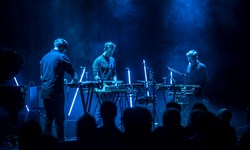