Our ticketing system Spektrix uses four cookies that are essential to making our website function properly. These four cookies track your booking process, allow you to log in properly as a customer, set test cookies for blocked Third Party Cookies before you start the booking process, keep track of your basket and improve your experience (e.g. programming the ‘recently visited’ and ‘recommended’ boxes at the bottom of our home page based on what events you are browsing through). You can change the options on your device or browser to stop accepting these cookies - however this may mean you are not able to use all functionality of our site.

Lighthouse Family, one of the most successful bands of the late 90s and early 00s, return after 18 years with a brand new studio album Blue Sky In Your Head, along with Essentials, all the bands classic songs remastered for the very first time to celebrate their 25-year recording history.

Tunde Baiyewu and Paul Tucker formed Lighthouse Family after meeting at Newcastle University in the early 1990s. Their 1995 debut album Ocean Drive was a slow-burning success, going platinum six-times while staying in the album charts for almost three years. The 1997 follow-up, Postcards From Heaven, featured three top 10 singles – ‘Raincloud’, ‘High’ and ‘Lost in Space’ – and also went six-times platinum, charting in countries all over the world. Their third album, Whatever Gets You Through The Day’ (2001) produced another top 10 single in the shape of ‘(I Wish I Knew How It Would Feel to Be) Free/One’, but by this time the band were at breaking point.

In the intervening years Paul formed The Orange Lights, while Tunde released two solo albums, but the old connection between the pair remained, and in 2016 they reunited determined to make a record, something that was classic Lighthouse Family, but also sounded like it could be made today.

The new album has something that has always been present with Lighthouse Family: a sense of optimism and renewal. Messages of hope and uplift, sentiments of community and communion, songs of love and connection, tunes to sing, loudly, from the heart - it can only be Lighthouse Family, back to dream up the magic all over again.

"We’re trying to create something anthemic and uplifting but real...that idea of: ‘I know the sun’s gonna shine again’, it’s quintessential Lighthouse Family.”
Paul Tucker on Blue Sky In Your Head 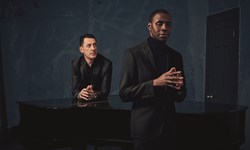