Please note this show has been rescheduled to Wednesday 3 February 2021 8pm. The event was originally advertised as taking place on Saturday 13 June 2020.40 years after he recorded his first album Golden Vanity, Martin Simpson is known as a guitarist of formidable talent. Equally at home playing English traditional folk, American folk and blues and his own compositions, he is consistently named as one of the very finest fingerstyle guitar players in the world.

Universally acclaimed as one of the finest ever acoustic and slide guitar players, and a fine banjo-picker to boot, his solo shows bear witness to an artist at the very top of his game. Whether interpreting material from tradition or singing his own potent self-penned songs, Simpson is a remarkable storyteller: captivating and profoundly moving.

Martin continues to collaborate with a dazzling array of people from across the musical spectrum: Jackson Browne, Martin Taylor, June Tabor, Richard Hawley, Bonnie Raitt, Danny Thompson, David Hidalgo, Danú, Richard Thompson and Dom Flemons are among the great musicians he has worked with.

Martin’s latest solo album Rooted, is a mixture of Simpson originals and traditional songs and tunes with guest appearances from friends old and new. As ever Martin is pushing in new directions, so you can expect exquisite ensemble playing and solo magic.

Martin is the most nominated performer in the BBC Radio 2 Folk Awards 18 year history with an astonishing 32 nominations, 13 of those as ‘Musician of the Year’, which he’s won twice. A virtuoso player without question, but above all Martin Simpson conveys his diverse treasure trove of material from the heart, performing with rare subtlety, intensity and honesty. 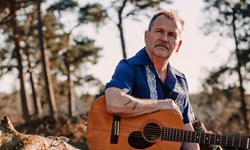