Please note this event has been rescheduled to Friday 19 November 2021. The event was due to take place on Wednesday 10 February 2021.​An evening of pure escape with stories, jokes and poems from writer, poet and TV and film producer Henry Normal, featuring all your favourite poems from his BBC Radio 4 series and his seven poetry collections.

Henry co-wrote and script-edited the multi-award winning The Mrs Merton Show and the spin off series Mrs Merton and Malcolm. He also co-wrote the first series of The Royle Family and the BAFTA award-winning Paul and Pauline Calf Video Diaries, Coogan's Run, Tony Ferrino, Doctor Terrible, all three of Steve Coogan's live tours and the film The Parole Officer.

In 1999, Henry set up Baby Cow Productions Ltd, which have produced highlights such as Philomena, I Believe in Miracles, Gavin and Stacey, Moone Boy, Uncle, Marion and Geof, Nighty Night, The Mighty Boosh, Red Dwarf, Hunderby, Camping and Alan Partridge.

Since retiring in April 2016, Henry has written and performed five BBC Radio 4 shows A Normal Family,  A Normal Life, A Normal Love, A Normal Creativity and A Normal Nature combining comedy, poetry and stories about bringing up his autistic son. His new BBC Radio 4 show is entitled A Normal Universe and will be transmitted from March 2020.

Henry's recent poetry books include Staring Directly at the Eclipse, Travelling Second Class Through Hope, Raining Upwards, This Phantom Breath, The Department of Lost Wishes, Swallowing the Entire Ocean and Strikingly Invisible. His new collection is a selected works entitled The Escape Plan and will be released in March 2020. 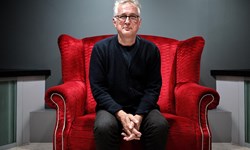